No down payment requirement is far and away one of the VA loan program’s most notable benefits.

But it’s also a perk that many believe is too good to be true. “What’s the catch?” “How much is that going to cost me?”

Let’s put those suspicions to rest with a thorough discussion of the VA loan program, and an explanation of why VA loans don’t require a down payment. 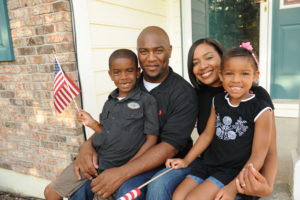 All About the VA Loan Guaranty

VA loans are made by private lenders. Banks and mortgage companies are the ones who lend the funds for service members to purchase a home, just like conventional loans.

Lenders typically require a down payment as a safety deposit. It’s a tidy sum that a lender can hold onto in case a buyer goes into default. But on VA loans, the federal guaranty takes the place of the down payment replacing it as the lender’s safety net.

“The members of our armed forces — for they have been compelled to make greater economic sacrifice and every other kind of sacrifice than the rest of us, and are entitled to definite action to help take care of their special problems.” – Franklin D. Roosevelt on signing the G.I. Bill, June 22, 1944

The VA loan program was part of the sweeping reform encompassed by the G.I. Bill of 1944. This bill introduced numerous benefits to the millions of service members returning from World War II.

Fortunately for military members, those benefits aren’t watered down into a mediocre financing option. As FDR stated, our Veterans are “entitled to definite action” and “special benefits.” The VA loan program truly delivers on that promise, with flexible credit standards, low closing costs, and no-down-payment financing.

It’s a special loan option restricted to some of the country’s most selfless citizens: service members, Veterans and their families.

Why $0 Down is Such an Awesome Benefit

Especially when compared to the flexibility of a VA loan, the conventional loan market is tough. The average down payment on a conventional loan in June 2012 was 20 percent of the loan amount, according to mortgage software provider Ellie Mae.

Want to know how that 20 percent translates into actual dollars? Relying on average figures from the Mortgage Bankers Association, the average U.S. buyer put down $48,179 to purchase a home in June 2012.

Veterans sacrifice their safety on a daily basis. They deserve the special benefits afforded by VA loans.

Fortunately for military buyers who may be short on cash, the VA loan program doesn’t require a down payment. It’s a benefit that military buyers love, and one that’s tough to locate outside of this exclusive financing program.